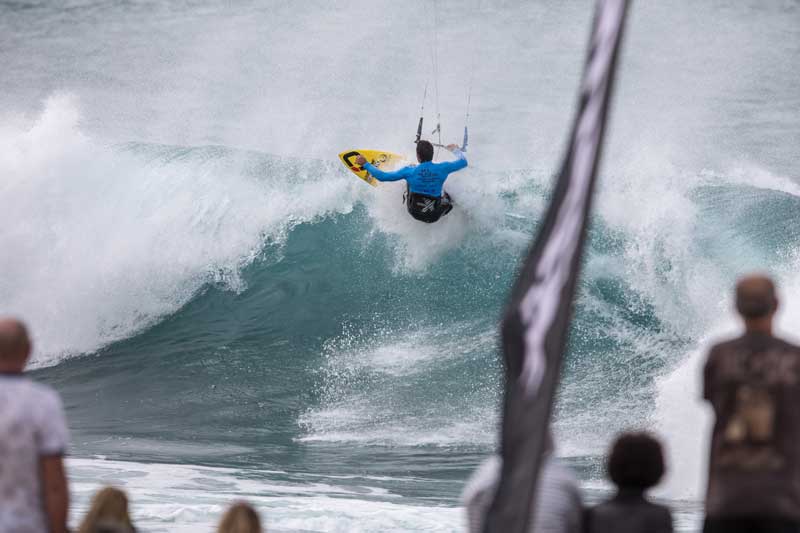 Paulino Pereira is instantly recognisable on the water. Nobody rides harder than he does, be it in the waves or in a strapless freestyle heat, and his ‘Portuguese Powerhouse’ nickname is well-deserved. He’s been one of the most consistent riders on the tour since it began, taking third in 2016 and only just losing his podium position at the final event in 2017 in Mauritius due to Keahi de Aboitiz’ last-ditch effort to unseat him. He doesn’t let slip-ups get him down though and the fact that he’s managed to stay among the top tier of the GKA tour riders is doubly impressive when you consider that he combines his training with his full time job as a mechanic in the Portuguese airforce.

Age:
27
Nationality:
Portuguese
Sponsors:
Ozone Kites, Appletree Surfboards, Mystic, Still
Years riding:
13
Years competing:
10
Best results:
3rd overall GKA Kite-Surf World Tour 2016
Specialist discipline:
Wave
Favourite spot:
Ponta Preta
Favourite trick:
Kiteloop
Favourite thing about competing on tour?:
The spirit and the vibe between riders and spectators
Standout moment 2017:
2017 was consistent for me, but I've been close to getting great results that could make my final ranking way better. Overall I was happy with it.
Favourite competitors to ride against and watch:
I always like to go against Airton, because we push the strapless handlepasses and it's really fun, but he's hard to beat
2018 goals:
Firstly have fun, show our passion to the world, make my sponsors happy and WIN!
How do you train?:
The winter season is hard for me because I have my work, and need to put in extra effort to have more time during the competition season, but I surf as part of my training and I like to swim too.